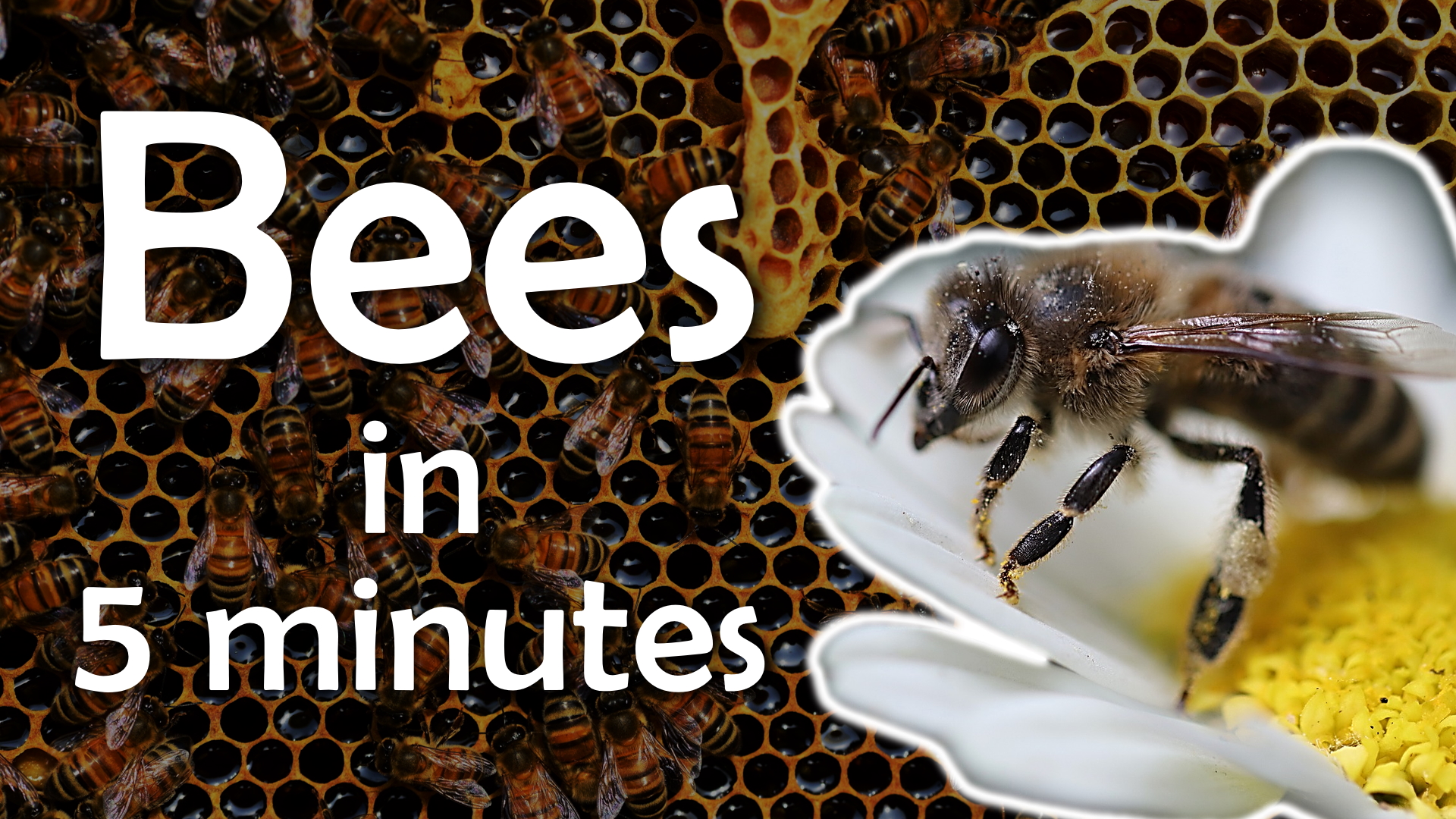 Bees are flying insects that are known for pollinating plants and producing useful substances like honey, beeswax, royal jelly, and propolis.

The ancestors of bees were wasps. While wasps are predators of other insects, bees collect pollen to survive. There are also some small anatomical differences between them.

The lifecycle of a bee includes the laying of an egg, several moultings of the larva, and pupation stage which results in a winged adult bee.

The body of a bee consists of 3 parts: the head, thorax, and abdomen.  A pair of large eyes cover much of their head and antennae can detect touch, smell, taste, and sounds. Bees also have 3 pairs of legs and 2 wings. Many bee species have a stinger which they use to defend themselves.

Most bees use their tongue to extract nectar and pollen baskets or scopal hairs on their legs to collect and carry pollen. When a bee finds a good source of nectar or pollen, it tells the other bees its location by doing the waggle dance. The direction and length of the dance signify the direction and distance to the food source.

When thinking about bees, most of us will probably think about honeybees. While honeybees are the only bees that produce honey, other bees are important as pollinators of crops and other plants too.

There exist around 20,000 species of bees and 7-9 families of bees. Some species like bumblebees and honeybees live socially, meaning they live in large colonies and each bee has its role in the hive. Other species like mason bees and carpenter bees live solitary and take care of themselves. Some solitary bees can nest in groups, but they will not actively support each other.

Bee Roles in a Hive

Bees living in a hive depend on each other to survive. Every bee has its role and they can’t survive without the support of other roles.

In a honeybee hive, there is one queen bee which is the only fertile female bee in the colony. She lays eggs and releases pheromones that keep the worker bees sterile. Other bees will follow her and protect her at all costs. When the queen bee becomes old, it is replaced by a new queen bee.

Drones are male bees with only one task – to mate with the queen bee, and after mating, they die. They don’t have stingers and they can’t gather nectar and pollen. In a beehive, there can be anywhere from several hundred to a few thousand drones. If the food for the colony becomes limited, drone bees will be expelled from the hive.

In a honeybee hive, there are also tens of thousands of sterile female worker bees. Their responsibilities are very broad and they change depending on the age of the bee. Worker bees clean the hive, care for the larvae, produce wax, control the temperature within the hive, guard the hive, pollinate plants, and have other duties.

The Importance of Bees

Approximately one-third of the world’s crops and 90% of all plants rely on cross-pollination, and in many countries, bees are the most important pollinators. The bees are necessary to produce the food we eat and pollinate the habitats for wildlife.

Even though bees are an integral part of many ecosystems, their populations around the world are in decline. The main reasons for this are

How to Support Bees

Fortunately, there are ways you can help bees to save them from extinction. The easiest way to help is by planting flowers in your garden. You should also stop using pesticides and consider placing a shelter for bees in a sunny place.

Roles of bees in a hive – https://www.mybeeline.co/en/p/roles-of-bees-in-a-hive

Why are bees important? And how you can help them – https://www.woodlandtrust.org.uk/blog/2018/07/why-are-bees-important-and-how-you-can-help-them/