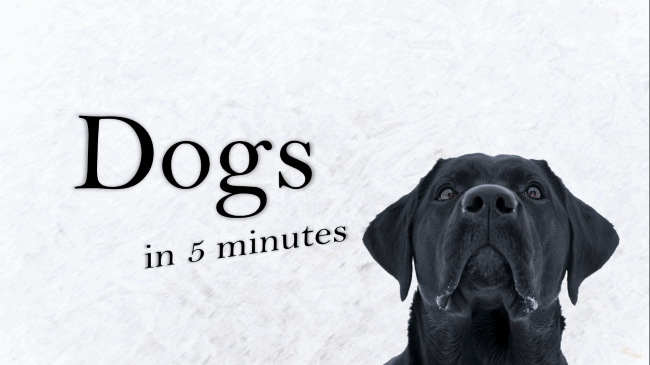 Dogs come in all shapes and sizes. All dogs are different, not just from their physical appearance but also from their personalities.

There are more than 300 dog breeds and they all belong to the same species, which means that they can be crossbred and still have a fertile offspring.

Lifespan for dogs varies from breed to breed. The average lifespan of dogs is 11-12 years. Dog breeds that tend to live the longest are Chihuahua, Yorkshire Terrier, and Pomeranian.

Dogs were originally bred from wolves. The first signs of relationships between man and wolves date back to around 15000 years ago. Scientists believe wolves were first attracted to human camps to scavenge for leftover food and over time domestication happened. Both profited from the new situation: wolves were used for hunting, keeping flocks together, and for protection from enemies. Man, in turn, made sure his wolves were fed.

As for pet ownership, initially, dogs were kept as pets only among the noble classes. Dogs belonging to Chinese emperors were said to have human nurses and their own servants.

Dog breeds vary in popularity. In the 1890s, Saint Bernards were the most popular breed but since the 1990s, Labrador Retrievers have taken the lead.

Understanding what your dog is feeling can give you a lot of useful information. Dogs communicate when they’re feeling happy, sad, nervous, fearful, and angry, and they use their faces and bodies to convey much of this information. You should observe the entire dog and the situation he’s in, in order to accurately determine what he’s trying to say. For example, if a dog has his ears lowered, tail tucked and a paw raised, he might be scared.

Dog training is teaching a response to commands, or the performance of actions not necessarily natural to the dog. Dog training can be used for basic obedience training or training for specialized activities like law enforcement, search, and rescue, assistance to people with disabilities, etc. You should start training your dog as early as possible, however, don’t ask your dog more than he can do. If your dog is failing to respond to training, make it easier for him, and work up to the hard commands step by step.

Some of the most popular training commands are:

There are many plants that are poisonous to dogs, therefore, it is really important to be aware of what plants you have inside and outside of your house. Dogs can be poisoned by plants if they eat or even just chew part of the plant. A few of the plants that can be dangerous are daffodils, lilies, and mistletoes.

Before Choosing a Dog

When choosing what dog you would like to have, you should consider many things and not just the looks. You should take into account the dog’s energy level, size, drooling level, etc. You would also need to think about whether you can afford a dog and would it suit your lifestyle. Numerous breed selection quizzes are available online and you should definitely take at least one before selecting a dog.

Most people put a lot of thought into naming their dog. Some of the most popular dog names of 2017 were Bella, Bailey, Max, Lucy, Molly, and Charlie.

Dogs’ sense of smell is 10,000 times stronger than humans’. Some dogs can even identify the smell of lung cancer from sniffing a person’s breath.

Dalmatian puppies are born completely white and develop their spots over time.

Dogs see colors on a blue and yellow scale but cannot distinguish between red and green.