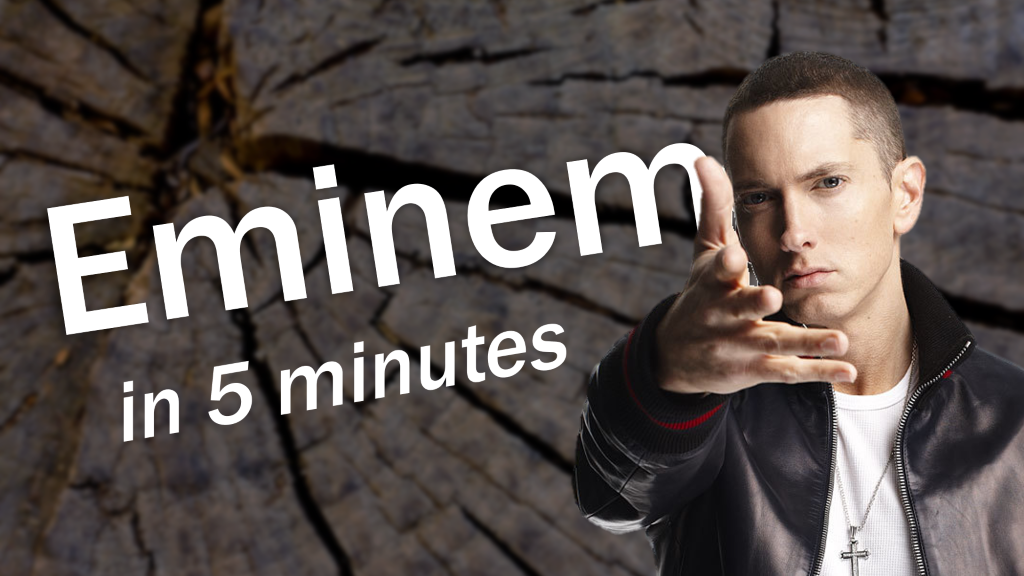 His father abandoned the family when Eminem was only a baby, so he was raised by his mother – Deborah Mathers. Eminem frequently fought with his mother who reportedly had addiction problems and was subjecting him to emotional and physical abuse.

They were often moving between Missouri and Detroit and were living mostly in public housing projects. The frequent changing of schools lead to Eminem having no close friends and being bullied at the school.

While in school, he loved learning English and studying the dictionary.

Eminem failed the 9th grade three times and eventually dropped out of school and started to express himself through hip-hop.

Eminem started participating in rap battles. Even though at the time almost all of the rappers were black, he quickly became one of the most respected rappers in the underground rap scene. At first, his stage name was M&M created from his initials, which he later changed to Eminem.

In 1996, he released his first independent album called Infinite, however, it didn’t attract much attention.

In 1997, Eminem released The Slim Shady EP which was discovered by the rapper and record producer Dr. Dre. After hearing it, he signed Eminem to his label.

In 1999, Eminem released The Slim Shady LP which became a huge success and sold over 3 million copies.

A year later, in 2000, The Marshall Mathers LP was released and it sold over 19 million copies. It won the Grammy Award for Best Rap Album and is considered to be one of the greatest rap albums of all time.

After overcoming addiction problems, he released Relapse in 2009, and Recovery in 2010 which won various awards.

Throughout his career, Eminem has sold over 155 million records globally making him one of the world’s best-selling artists. An American magazine Rolling Stone has even ranked him 83rd on the list of 100 Greatest Artists of All Time.

Around 1990, Eminem began an on-and-off relationship with Kimberly Ann Scott.

In 1995, they had a daughter named Hailie Jade Scott, and in 1999 they got married.
Eminem and Kim divorced in 2001, however, they later briefly remarried and divorced in 2006 agreeing to joint custody of Hailie. Eminem also has custody of Kim’s daughter from another relationship and Kim’s twin sister’s daughter.

He started having problems with alcohol, sleeping pills, and prescription painkillers, and in 2007 he overdosed and almost died. By early 2008, Eminem had overcome his addictions and returned to writing music.

Before Eminem became a rapper, he wanted to become a comic book artist.

Eminem’s mother filed an $11 million defamation lawsuit against him because of his lyrics about her. She settled for $25,000 and more than $23,000 of that went to her lawyer.

Eminem has founded the Marshall Mathers foundation which helps disadvantaged youth in Michigan.

Eminem’s song “Lose Yourself” was the first rap song to win an Oscar for Best Original Song.

Eminem is the only artist to have eight albums consecutively debut at number one on the Billboard 200.