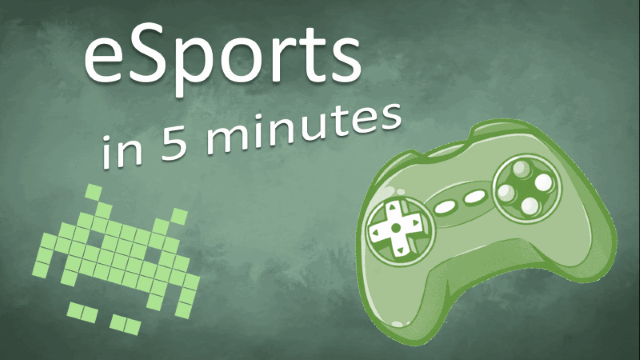 eSports or electronic sports is the term used when talking about video games that are played competitively. Games can be played over the internet or via a local area network (LAN). LAN games usually have very little lag and higher quality. Competitions via LAN also help to ensure that players follow the rules since all players have to be present to participate.

Depending on the game, players can either play by themselves or play in teams.

Some of the most popular eSports games are:

Competitive gaming has been around almost as long as video games themselves. In 1980, video game company Atari held the first video game tournament – the Space Invaders Tournament.

In the 1990s, gaming tournaments benefited from increasing internet connectivity. The first real instance of eSports is considered to be the Red Annihilation tournament in 1997 for the popular game Quake and it had over 2000 participants.

eSports started to become more popular after the turn of the millennium, with the rise of popular tournaments and games like StarCraft, Counter-Strike, and Warcraft.

Lately, the popularity of online streaming services have helped the growth of eSports, and they are the most common method of watching tournaments.

eSports tournaments are usually physical events in front of a live audience.

Nearly every big eSports tournament is streamed online, usually to the free video streaming platform Twitch. Twitch allows people to watch their favorite team or individual players while chatting with other spectators.

Top tournaments in eSports are:

The largest tournament prize pools have reached as high as 20,000,000 dollars.

Only ten years ago, competitions drew a few thousand fans in person and over the Internet. In recent years eSports has been only getting bigger. 173,000 fans attended the Intel Extreme Masters tournament in person this year in Katowice and the tournament reached 55 million fans online. In 2016, the total audience of eSports reached 323 million people worldwide and it is estimated that it will reach 589 million people by 2020.

Demographically, Major League Gaming has reported viewership that is approximately 85% male and 15% female, with a majority of viewers between the ages of 18 and 34.

Being a pro gamer is considered by many to be a dream profession – top eSports players earn millions of dollars and receiving money for playing games seems tempting. However, it is not as easy as it may seem.

The competition in the field is very high and top eSports players spend large amounts of time every day developing new skills that will help them compete in their games and working on new strategies with their teams. Players also need to constantly work on their reflexes and thinking speed, for example, professional StarCraft players are able to do over 300 actions per minute during a match.

Is It a Sport?

It is an ongoing debate about whether eSports can be considered to be “real sports”.

Some people argue that an activity needs to be physical for it to be considered a sport. Others argue that just like poker and chess, eSports are mind-based sports and require careful planning, precise timing, and skillful execution.

Since 2013 eSports players are considered professional athletes, in the regard that they can receive a VISA to travel to the US for the purposes of participating in eSports tournaments.