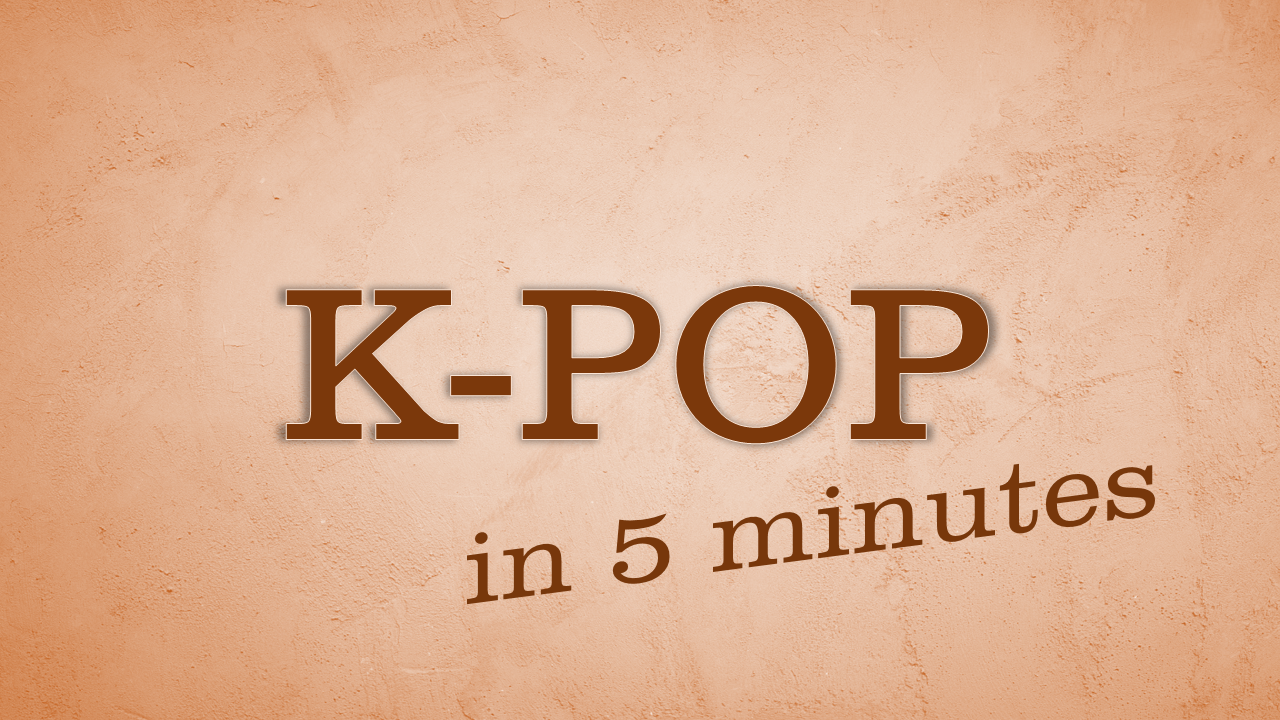 K-pop (or Korean pop) is a popular music genre originating in South Korea and it uses a mix of electronic, hip hop, pop, rock, and R&B music. The genre has had a solid fan base ever since the 1990s when the music was included in Korean dramas such as First Love. Korean dramas have been an important vehicle for spreading interest in Korean culture.

K-pop entered the Japanese market at the turn of the 21st century and rapidly grew into a subculture among teenagers and young adults of East and Southeast Asia.

With Facebook fan pages, social networking, and music videos on YouTube, K-pop is becoming popular in many other countries around the world.

Korean pop stars go through an extensive training process also called idolization where the entertainment companies invest a lot of money and effort to nurture and promote artists to be of the highest standard. Most idols apply at a young age, usually 14 or 15, and they need to take language, vocal and dancing lessons, and are taught everything they might need to know. The pressure for becoming an idol is high, and can often result in some trainees altering their appearance and even going through plastic surgery.

K-pop groups often contain a large number of members. For example, Topp Dogg currently has 13 members, and Girls’ Generation, also known as SNSD, has an 8 person crew. Every additional member is a person the fans will love and adds more opportunity for labels to sell t-shirts, posters, and other branded products.

Artists and groups are often formed through an audition process under a record company. The major record labels in South Korea are SM Entertainment, YG Entertainment and JYP Entertainment.

The K-pop industry is worth billions and the most popular groups earn a lot of money. According to FORBES, Big Bang took home $44 million in pretax earnings over 2015. However, idols have to share a huge chunk of their earnings with their agencies and split the rest among their group members.

When talking about K-pop one must mention the immense amount of fans.

Social media has been instrumental in the global reach of K-pop, particularly the video-sharing site YouTube. Of the 2.28 billion worldwide K-pop YouTube views in 2011, 240 million came from the United States and this number is only growing.

K-pop is increasingly making appearances on Western music charts. Many fans travel overseas to see their idols on tour, and tourists commonly visit South Korea from all over the world to see K-pop concerts.

Groups commonly have dedicated fan clubs with a collective name and sometimes an assigned color. A unique feature of K-pop fandom is the ‘fan chant’. When an idol group releases a new song, fan clubs will organize a fan chant and learn it so that they can chant parts of the song or idols’ names during live performances.

In K-pop, a lot of genre-specific terminologies are used. Here are a few examples:

To better understand K-pop you should definitely take a look at a couple of music videos. Here is a list of a few popular ones:

If you would like to find out the latest news about K-pop, you might want to explore these sites: